More effort leads to more love (but only when we are able to complete our actions). Customization is about more than individual preferences. It is also about the effort put into it. This customization effort increases liking.

This effect is also called the ‘Ikea-effect’ since Ikea lets its customers assemble their own products.

The IKEA Effect from Advanced Hindsight on Vimeo.

Imagine you’re given a sheet with clear instructions on how to create an origami crane. Then you make one. Dan Ariely found that you value your own creation more highly than other people’s. This is due to the fact that you’ve put a lot more effort into it.

Dan proved this further by making the task harder. Imagine you get the same task, but now with unclear instructions (“for the sake of science” Dan removed the legend). Now the task is harder and involves even more effort.

The result: with unclear instructions, your creation looks even worse (according to others), but you value it even higher than your first creation. Furthermore, you would think that after putting more effort into your creation that others would love your creation as well… 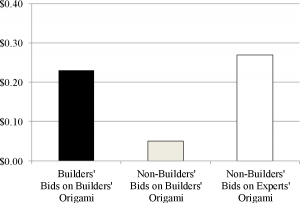 Having to close a pop-up requires effort. This might explain why Kras.nl found a 30% increase in conversions among visitors that close a pop-up questionnaire…

Further reading on the commitment bias or labor-love effect: